Living in the Poppleton neighborhood of West Baltimore has been heartbreaking for residents — with the city taking their homes by eminent domain for a project that’s been dragging on for a decade, spawning more empty vacant lots than new buildings.

Battling what they saw as a textbook case of failed development, residents and their allies made signs and fliers, held rallies, searched land records and fiercely argued with city officials. to preserve what remains of a community inhabited by black families since the Civil War. .

Today, to their surprise and delight, they have to stand side by side with Mayor Brandon Scott, Housing Commissioner Alice Kennedy and La Cité Development Chairman Daniel Bythewood Jr. to announce that they basically get what they wanted.

Sonia and Curtis Eaddy, who fought for 18 years to keep their home at 319 North Carrollton Avenue, will be able to keep it.

And the 1100 block of Sarah Ann Street — the row of rainbow-colored houses the city acquired for the La Cité project — will go to Black Women Build Baltimore (BWBB) instead.

The nonprofit is to rehabilitate the 11 historic townhouses, which residents and conservatives feared would be demolished, and sell them at an affordable price, giving former tenants the right of first refusal.

“My hands went to my face and I cried,” Sonia Eaddy said, recalling the moment she heard the news in an interview with The drink.

When asked what set the city back in the 11th hour – it lost its legal battle to end the conviction, which was pending appeal – Eaddy cited growing public pressure after the Save campaign Our Block from last year.

“We had a new mayor and he was starting to look bad,” she said. “It had been behind the scenes for years, but people were watching now.”

UMBC professor Nicole King, who supported the residents in their efforts, agreed.

“They say you can’t fight City Hall, but they did and actually succeeded. Now the city is putting their money in their mouth,” King said.

“Sonia was relentless and the community stood up,” she continued. “They weren’t going to let the city roll over them.”

• Amid demolition and stalled development, Poppleton remains in limbo (03/14/22)

It took “strong negotiations with the developer over the past eight weeks,” she said, to get the city out of its bonds that were locked in nearly 20 years ago.

“We can’t totally erase the past and go back hundreds of years and undo the negative impact of racist policies, but we realized it was important for us to go into neighborhoods and do whatever what we can do now to set the stage for the equitable development we want,” Kennedy said. The drink.

Kennedy said the city changed course to Poppleton because of the strong push from the community (“we knew they had frustrations”), a sense of urgency (“my concern was that the buildings wouldn’t don’t sit around longer and deteriorate”) and because his agency’s political priorities have shifted.

“Transparency, collaboration, equitable neighborhood development – ​​our way of looking at things in 2022 compared to 2014 or before is very different,” Kennedy said.

Shelley Halstead, founder and executive director of BWBB, had a simpler takeaway:

Sonia Eaddy at her Carrollton Avenue home, which is the subject of town sentencing proceedings. (Shen Fern)

In an emailed statement, Bythewood had a brief response: “I am pleased with the outcome we have all achieved working with the administration, our neighbors and the La Cité team to build a win for all. “

In an interview with The drinkKennedy laid out details of the agreements reached with the company that are to be presented to the Board of Estimates on Wednesday.

The city returns 319 and 321 North Carrollton to the Eaddys, paying La Cité $260,000 to offset pre-development costs. In return, the New York-based company will relinquish its rights to develop the plots.

The city attorney’s office will ask the court to overturn the decision in favor of the city in the legal challenge to the Eaddy’s conviction, so that the properties can be returned to the couple.

In a separate deal, Baltimore is selling Sarah Ann’s 11 properties to BWBB for $1 each and appointing the nonprofit as their new developer.

The group is a home ownership and wealth creation initiative that trains black women in carpentry, electrical and plumbing skills while restoring vacant and deteriorated homes.

Under the terms of the agreement, the group must pay the developer $2,000 for each of the properties, then stabilize them and offer them for sale.

In a video produced last year of the Sarah Ann Lane homes, Baltimore Heritage officials said they were built in 1870. (YouTube)

Last year, Halstead said, she approached Organize Poppleton and the city to offer residents her group’s services. When asked why she reached out, she replied “because it just wasn’t right, what was happening to them.”

Now she looks forward to the challenge of creating livable space out of these small structures: they are 500 square feet in size and 10 feet wide by 25 feet deep.

She plans to start by gutting the interiors and removing the gas meters from the living areas, where they take up valuable space.

“Or maybe it’s going to mean, in the kitchen, put a bench at the table that opens up and you can put storage there,” she continued. “I think of it almost like a boat, with lots of shelves built in.”

At the end of the process, she predicts a selling price of less than $100,000 for buyers – further softened with any property tax credits that may apply.

Will the houses keep their rainbow colors? Yes, if possible, as long as it does not disqualify properties from historic preservation tax credits.

“It’s the first thing everyone asks for,” she explained.

What will the rest of the area look like in a few years when Sarah Ann’s homes are due to be completed?

Will the former tenants, displaced by the city and rehoused, be able to buy them back and return?

What will happen to the nearly 10 acres remaining to be developed under La Cité’s Land Development and Disposition Agreement (LDDA) with the City? Will there be more demolition?

There are nine other properties to be demolished in Poppleton and one industrial space which will be partially demolished and partially stabilized, according to HCD spokeswoman Tammy Hawley.

Asked to respond in detail to residents’ description of his project as “failed” and “stalled” and his vision for its future, Bythewood had only this to say:

“We have made progress in development, brought in new residents, are developing a new grocery store, and I look forward to the future development of a Class A seniors’ building,” he wrote.

So far, the company has only completed the Center/West apartments on Schroeder Street despite approved public funding of $58 million in tax increase (TIF).

Both structures – of the 30 buildings originally envisioned – fall far short of the plans drawn up when the company won the rights to develop nearly 14 acres in Poppleton in 2005. 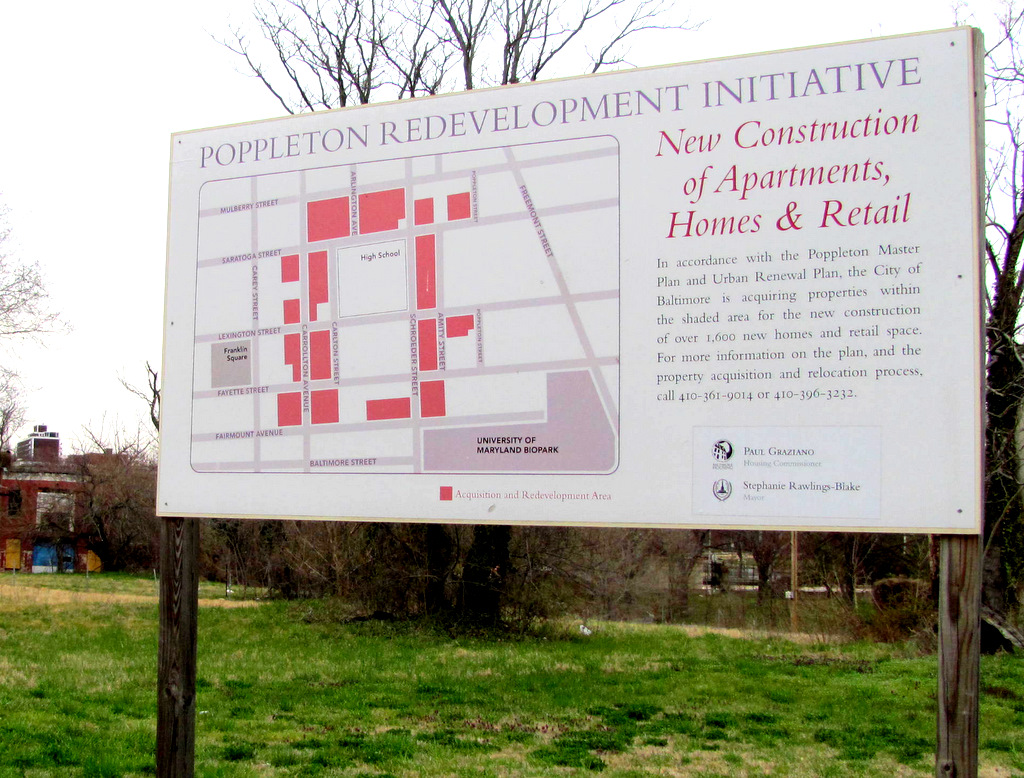 A sign promising 1,600 new homes on the way to Poppleton in 2015. Instead, two high-end apartment buildings have been completed. (Marc Reutter)

Despite the lack of progress, the city has spent millions of dollars demolishing hundreds of townhouses in the area.

As a result, Poppleton is now a patchwork of cleared land and dilapidated townhouses west of Fremont Avenue and north of the University of Maryland BioPark.

(Bythewood said his company has identified an investor and is preparing to present its plans to the city’s architectural review board.)

Kennedy also said negotiations with the developer are continuing on another amendment to the LDDA.

She promised residents “will have a seat at the table” in the conversation about the future mix of housing types in Poppleton.

Eaddy said she and others in the community oppose high-rise apartments and owner-occupied housing. Talk with The drinkKennedy reported that she heard them.

“It was important to put homeownership back on the table,” she said.

When asked if City Hall can deliver on those promises after years of bad blood and mistrust, Kennedy said she hopes so.

“We’ve had intense conversations with the developers in the hopes of being able to really re-establish those relationships with La Cité and with the community.” 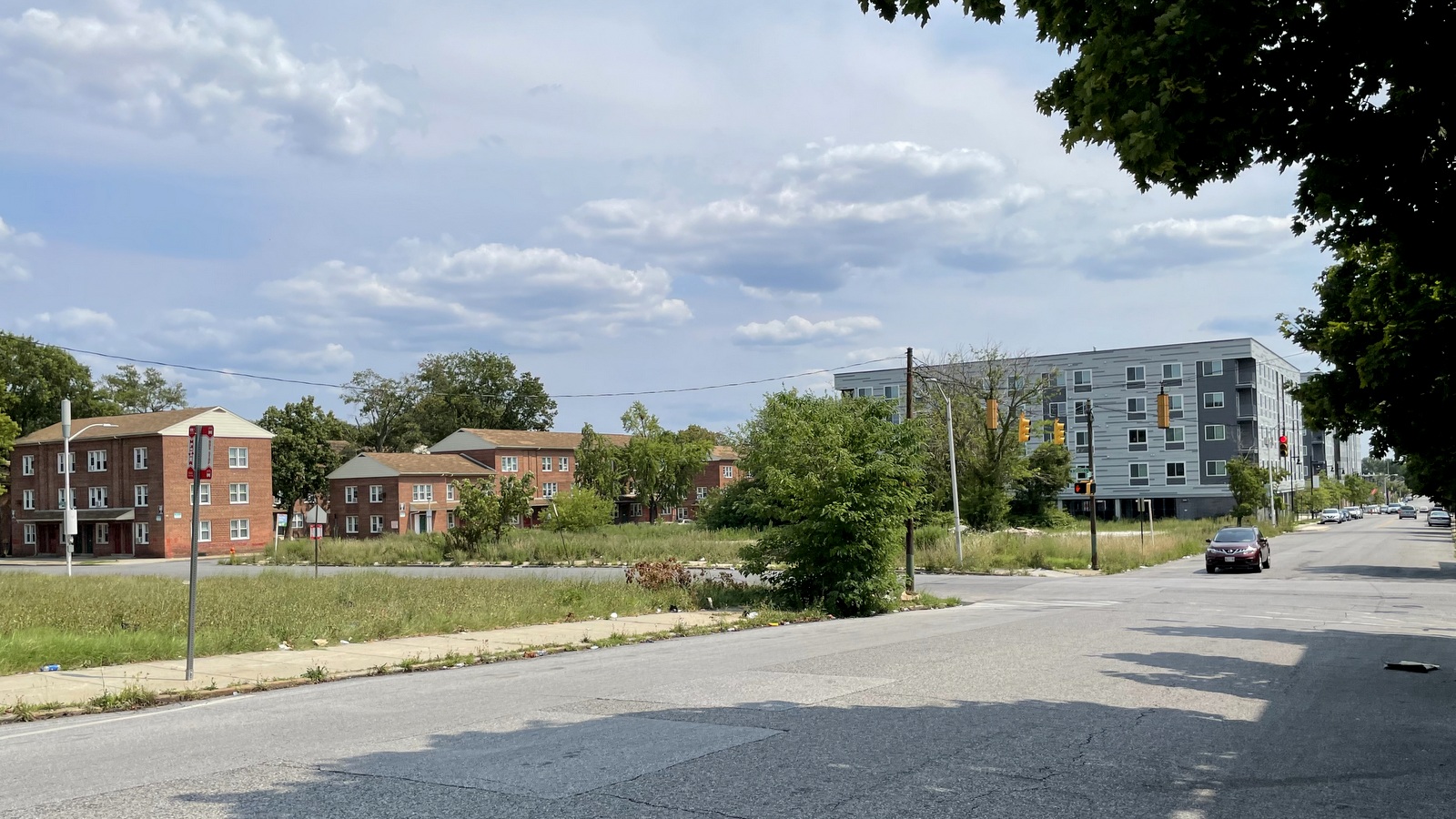 The land where La Cité plans to provide affordable housing, adjacent to its Centre/Ouest apartment buildings (right). The Poe Houses, slated for demolition, are on the left. (Fern Shen)