Just around the corner from Tel Aviv’s central Dizengoff Square, Noa Karavan-Cohen grew up playing in the leafy park designed by her grandfather, landscape architect Abraham Karavan, and later named in his honor.

Her late father, artist Dani Karavan, hid among the olive, guava, mango and grapefruit trees there when his teachers sent him out of class at the nearby school – a frequent occurrence.

“He was dyslexic,” Karavan-Cohen said of his father, an award-winning sculptor who died on May 29.

His studio was housed in an apartment building built on the site of his two-bedroom childhood home on Zvi Shapira Street, adjacent to this park.

This weekend, to mark the first year of the artist’s passing, the architectural event Open Houses – called Batim Mibifnim in Israel – created a Karavan experience in Tel Aviv.

There will be tours of his studio and in situ sculptures, as well as gardens and boulevards designed in the early years of the city by his father.

Batim Mibifnim, which is celebrating its 15th anniversary and runs from Thursday to Saturday, will see hundreds of historic buildings, public spaces, private apartments and homes open to the public free of charge for a weekend, with some requiring a pre- registration.

Friends and family pay their respects at the coffin of Israeli sculptor artist Dani Karavan, who died on May 29, 2021. His eldest daughter, Noa Karavan-Cohe, stands to the right of his picture (Miriam Alster/Flash90)

This year’s Batim Mibifnim will also include tours of the city’s under-construction underground transportation system.

Part of this planned underground metro system will require changes to Habima Square outside the Tel Aviv Cultural Center, where Karavan has designed an outdoor space with landscaping that echoes the design of Tel Aviv in as a garden city. His family is currently fighting against the NTA Metropolitan Mass Transit company responsible for planning the city’s public transport system.

He has created some 80 site-specific sculptures in Israel and around the world, including Tel Aviv’s White Square, the Tel Aviv District Court wall reliefs, and installations at the flagship offices of Bank Hapoalim and Bank Leumi. He was also involved in the process to have Tel Aviv’s Bauhaus architecture collection designated as a UNESCO site, earning it the nickname White City. 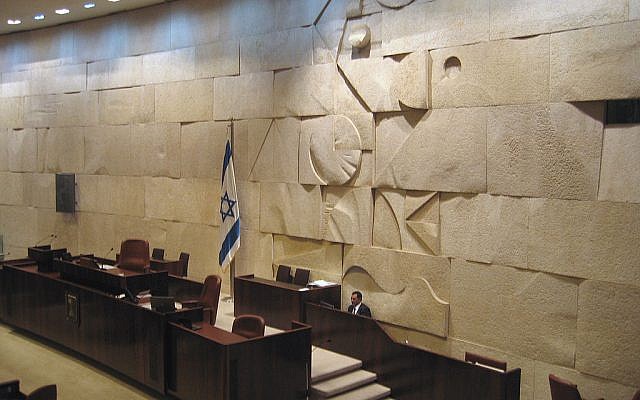 Wall sculpture “Pray for the Peace of Jerusalem” by Dani Karavan in the Knesset (photo credit: Wikimedia Commons/Yair Talmor)

“Pray for the peace of Jerusalem,” on the southern wall of the Knesset plenum, is also by Karavan.

Much of his love for Tel Aviv and his appearance came from his father, Tel Aviv’s first landscape architect, Avraham Karavan, who did much of the garden city plan designed by Sir Patrick Geddes, including by planting the trees and flowers that still line the city’s boulevards and parks today. 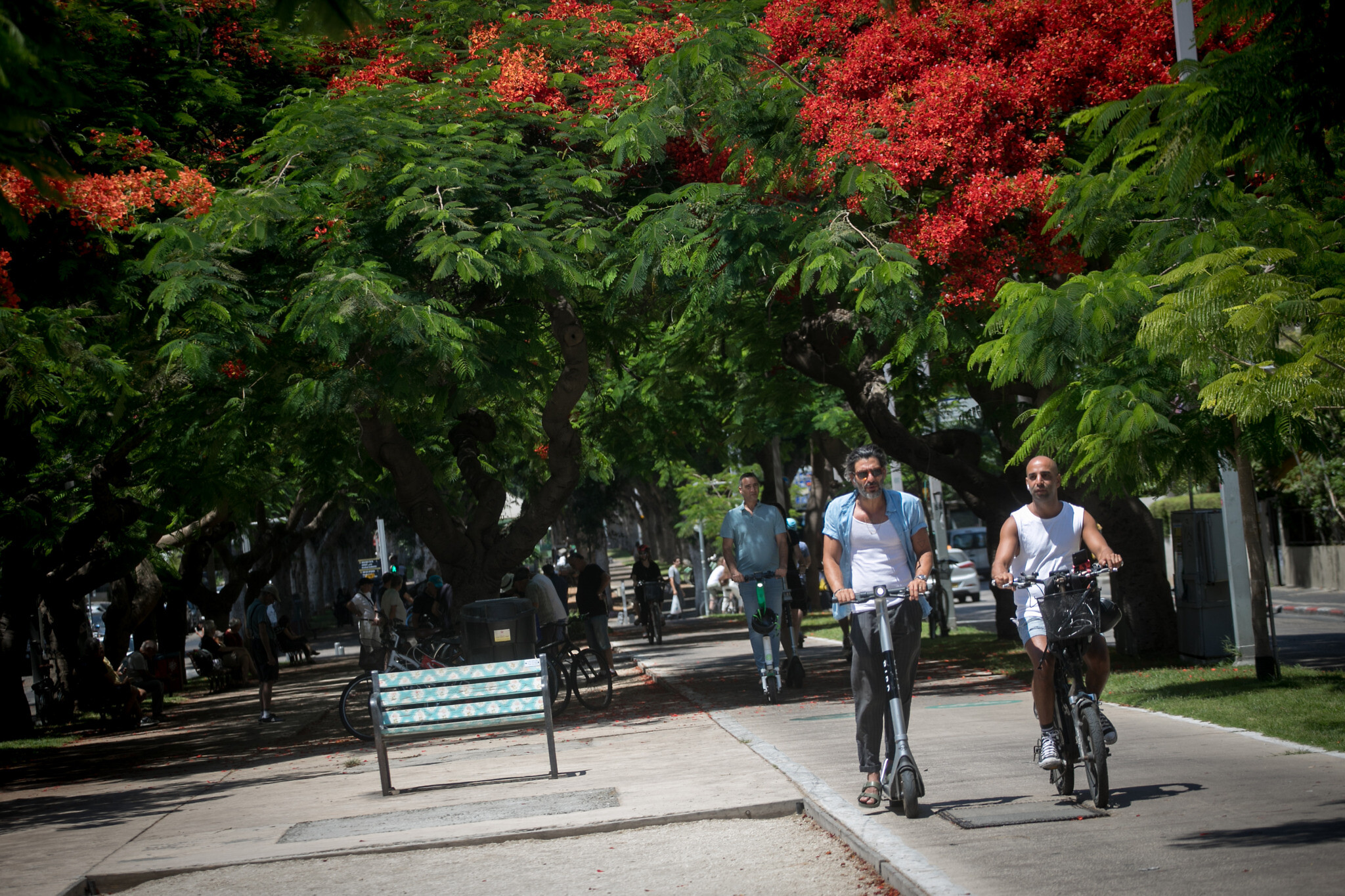 Israelis cycle on Rothschild Boulevard on June 20, 2021, one of many boulevards and parks planned by landscape architect Abraham Karavan, the father of sculptor Dani Karavan (Miriam Alster/FLASH90)

Dani Karavan’s parents came from Ukraine to Israel in the 1920s. They first lived near the Sea of ​​Galilee and in Tel Aviv, moving from a tent by the beach to the Yemeni neighborhood and finally at the small house near Dizengoff Square, where Abraham Karavan bought a small plot of land.

“There was no money,” Karavan-Cohen said. Her father slept on a folding bed in the kitchen.

The house was demolished and rebuilt in 2000 into a four-story building. On the first floor was Karavan’s workshop and office, which he used whenever he returned to visit. He and his wife and three daughters lived in Italy from 1967 to 1980, then moved to Paris, where he received funding from the city, including for the assistants who worked with him. Much of his work remains there to this day.

When Noa Karavan-Cohen, the eldest daughter, returned to Israel to enlist in the army in 1981, she lived in the family home as a young soldier and then as a university student. Her two younger sisters also used the house in their late teens and twenties. 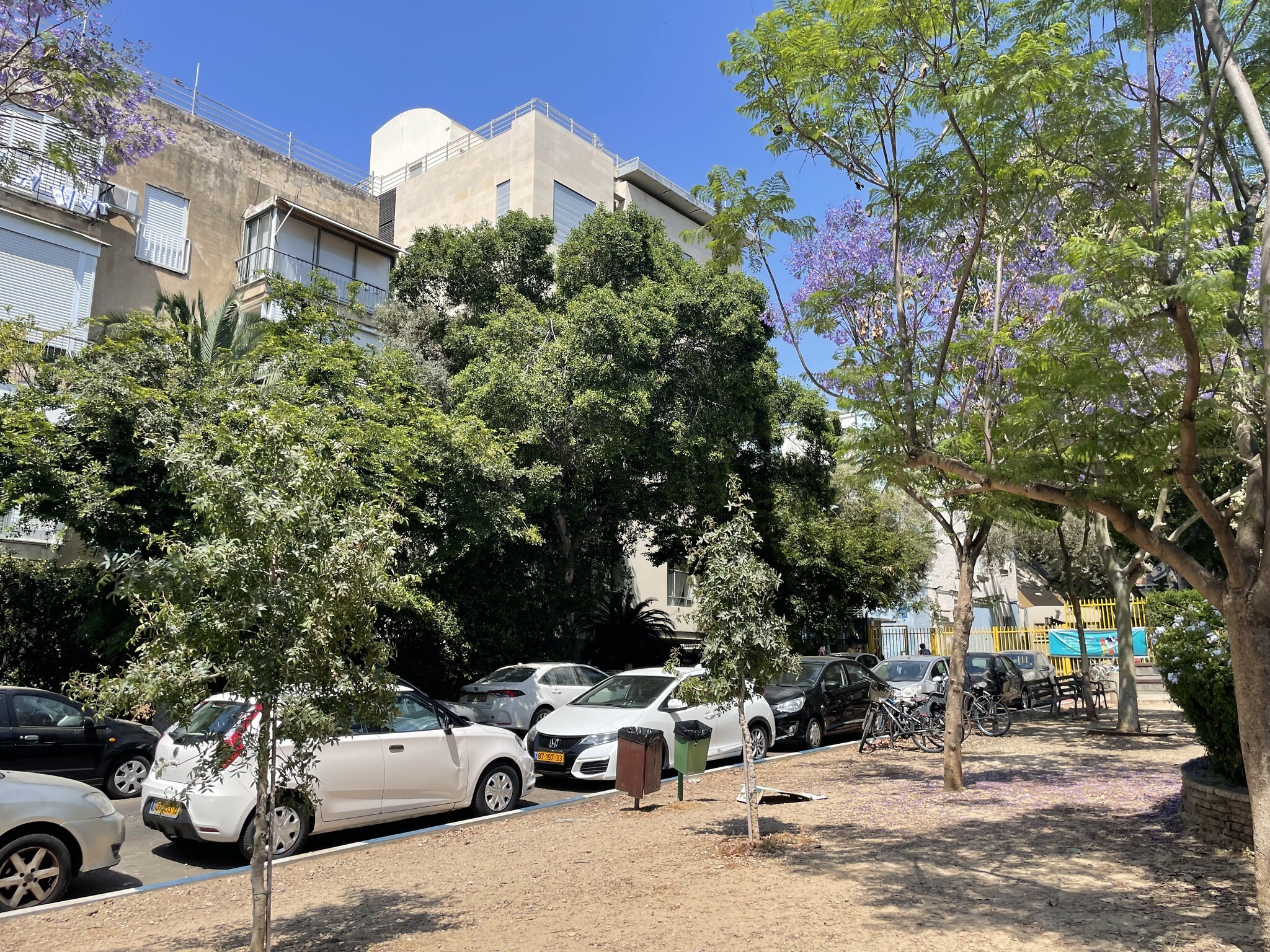 The building behind the trees houses the studio of sculptor Dani Karavan, whose simple family home once stood on the same site; her father, landscape architect Abraham Karavan, designed the garden in the center of the street (Jessica Steinberg/Times of Israel)

Over the years, the neighboring houses on this peaceful garden street were gradually demolished and rebuilt into larger apartment buildings surrounding the park designed by his grandfather, planted with flowering shrubs and purple jacaranda trees.

“My mother always misses home. We all do it,” Karavan-Cohen said. “All of our friends were coming…It wasn’t fancy but it was the real thing.”

When Batim Mibifnim organizers offered tours to mark the first anniversary of his father’s death on May 29 last year, it turned out they wanted to show the studio as well as the public sites. “We said, sure,” Karavan-Cohen said.

He was very Israeli, Karavan-Cohen said, despite spending many years studying and working abroad.

Karavan learned to walk in the sand of Tel Aviv, she says, and it became her first sculpting material. He learned the fresco mural technique in Florence in the late 1950s and wanted to bring it back to Tel Aviv.

Upon his return to the city in 1956, he was commissioned to paint murals at the Tel Aviv District Court. When he realized he couldn’t do frescoes on cement, he created cement bas-reliefs instead. 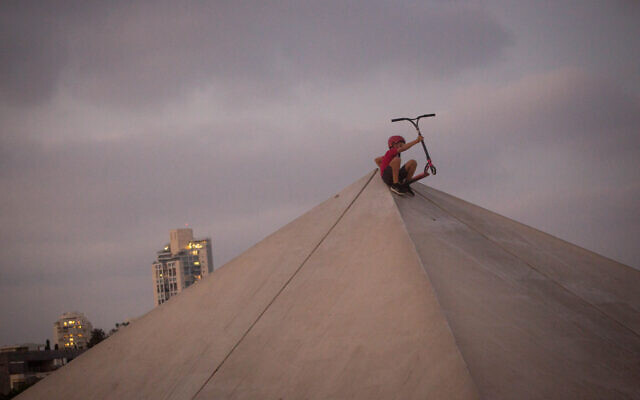 Much of his work in Tel Aviv revolved around his lifelong friendships with famed architect Yaakov Rechter and Rechter’s brother-in-law, engineer Micha Peri. Rechter was married to actress Hanna Maron, whom Karavan met while doing theater sets, and Maron connected Karavan to her husband.

It was Peri who brought Karavan to his iconic work at the Negev Brigade Monument, designed in memory of members of the Negev Palmach Brigade who died fighting for the establishment of the State of Israel in 1948.

The Negev monument was built between 1963 and 1968; in raw concrete, it extends over 10,000 square meters. A tower alludes to a watchtower, while a pipeline tunnel popular with visitors symbolizes a water channel in the Negev that was defended by soldiers. 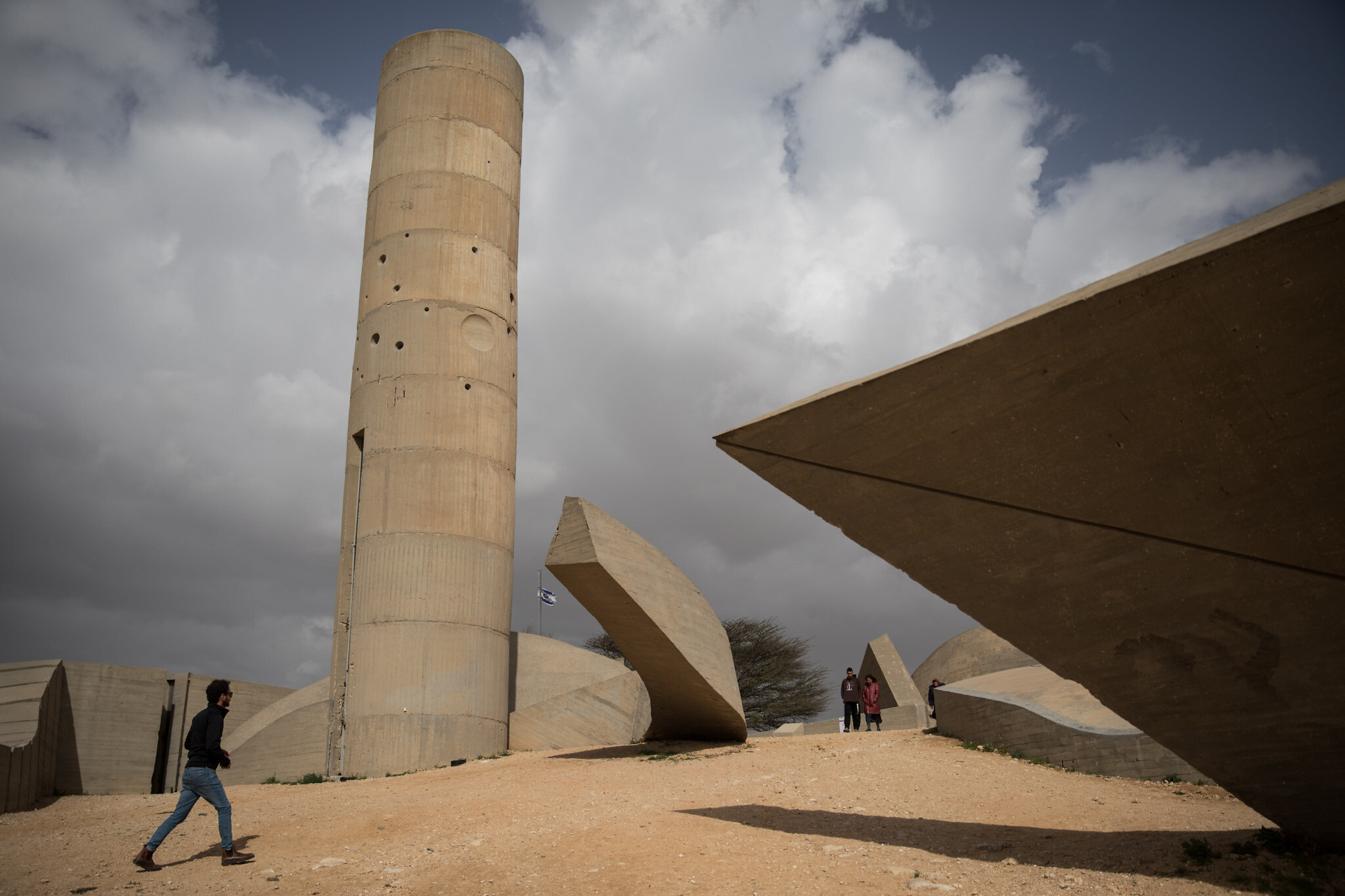 The Negev Brigade Monument in the southern Israeli city of Beer Sheba in the Negev, February 17, 2018. The Negev Monument was designed by Dani Karavan in memory of members of the Palmach Negev Brigade who fell fighting on the side of Israel in the 1948 Arab-Israeli War. (Courtesy Hadas Parush/Flash90)

“He couldn’t explain how or why he designed it the way he did,” said Karavan-Cohen, who was just a toddler at the time, and only remembers of a dog named Negba that Peri brought from the site. “The site-specific term didn’t exist yet.”

Twelve tours and related activities are available during the Batim Mibifnim weekend, including Karavan’s studio; his work at Bank Hapoalim and Bank Leumi; an evening conference at the French Institute on refugees, a subject close to his heart; activities for children in Habima Square; bas-reliefs at the Tel Aviv District Court; the White Square; and two White City tours led by family friends and experts.

Despite the architectural angle of the event, Dani Karavan was not an architect, although he was often called upon, Karavan-Cohen said.

“He never studied architecture,” she said. “He called himself an artist, and if specified, a sculptor.”